A pack of PT Cruisers were part of the parade and car show at the Irrigon Watermelon Festival on Saturday, July 25, 2009. Chrysler announced the demise of the Cruiser during the dark economic days for Chrysler in January of this year. Latest information is that the model has been revived and will continue to be produced for the foreseeable future. [img_1030]

The Irrigon Watermelon Festival took place on Saturday, July 25, 2009. While the crowd was smaller than last year during the afternoon and evening activities they were enthusiastic and had fun.

The day was warm with temperatures topping out in the 90s. There was plenty of sliced watermelons, burgers, fries, and other food to eat. Among the entertainers were Too Tall Papas, Tony Madrigal and Columbia River Bluegrass Band. The Morrow County Sheriff had a safety and CSEPP display. A variety of kiosks were set up selling artwork, jewelry, kites, banners and a variety of other items.

The kids had the playground to spend time in. The adults could listen to the music, wander the grounds or play bingo.

At 9PM the crowd moved on to the street dance. It was a great evening for an outdoor concert. Just as the music started up the International Space Station with the Shuttle docked to it cruised overhead in orbit around the earth.

Too Tall Papas performed jazz in the late afternoon during the Irrigon Watermelon Festival. [DSCN2079]

LEFT - Too Tall Papas perform at the Irrigon Watermelon Festival on Saturday, July 25, 2009. [img_DSCN2085] RIGHT - The Columbia River Bluegrass Band made up of people from around the Tri-Cities played a selection of folk and bluegrass songs that were immediately recognizable. [DSCN2428]

LEFT - A tugboat and barge makes it's way downriver under the watchfull eye of a boy on the rock break surrounding the Irrigon marina. [img_1126] RIGHT - The Irrigon Marina. [img_1133]

LEFT - A PT Cruiser is carefully driven through the park on it's way out to the highway. [img_1141] RIGHT - Tony Madrigal performed in the afternoon at the main stage. Among the songs he sang was a soulful rendition of Roy Orbison's Only The Lonely. [img_1162] 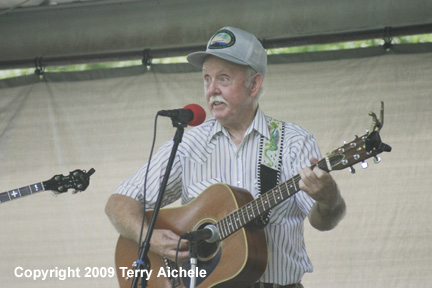 LEFT - Members of the Bluegrass Band were versatile, here a performer plays a mandolin and violin. Left [img_3099] and Right [img_3105]

A number of vendors showed their goods to the people attending the festival. [img_3111]